I can’t believe I get to say this, but in June I’ll start a new job as an Assistant Professor in the Department of Linguistics at Brigham Young University!

First off, I can’t believe my odds. There are so many amazingly talented grad students out there. Seriously. Several times during the past few years, I’ve seen and met some super accomplished folks, and I’m shocked they’re only grad students. Unfortunately, the academic job market is fierce and not all of them go on to get academic jobs. Especially this year. I’m convinced that once you get to a certain level, it mostly comes down to luck after that. I was dealt good cards this year and that’s really the only reason I get to write this right now and other people can’t.

BYU is going to be awesome!

I’m really excited for BYU for several reasons. First, it’s where I got my undergrad. I’ll be teaching in the same rooms where I myself learned linguistics. In fact, during my campus visit, my teaching demonstration was in the very room that my Intro to Linguistics course was. I’ll also be colleagues with my former professors. (Calling them by first name will take some getting used to!) The campus is beautiful and right in the foothills of an enormous mountain. The Humanities building is big and beautiful. It’ll be great to be there again.

What I didn’t know as a student, but what I can really appreciate now as a future teacher, is the flexibility in teaching that BYU Linguistics offers. I’m slated to teach sociolinguistics, dialectology, phonetics & phonology, and quantitative methods this year. I don’t know if too many schools could have offered me such a perfect assortment of courses. Plus, they’ve got several courses on the books that are specifically designed for faculty interests. I probably won’t be able to teach those for a few years, but if there’s some cool topic I want to try out, I won’t need to go through too many hoops in trying it out once.

In fact, I’ve already started some work for BYU Linguistics. I’m helping to prepare some course material to be used online during a study abroad next year. I’ll also get started a little earlier than normal (end of June) so I can teach a course this summer. It’s crazy to think that my family and I will be moving in less than three months!

I’m also excited to begin research in Utah! I’ve always been interested in dialectology, especially in the American West. How many dialectologists land jobs in the heart of the geographic region that most interests them?? I have so many research questions that have to do with Utah English and Mormon English, not to mention surrounding areas like Wyoming and Idaho. To think that a few years ago I had to get a grant to collect fieldwork in Utah—now all I’ll need to do is go get groceries! I’m looking forward to collecting some data as soon as I get there.

I wanted to post this chart summarizing my job hunt over the past two (or three-ish) academic years. I applied to basically everything I could possibly see myself doing. I’ve heard stories of people applying to over 100 jobs. Well, for a sociolinguist, there really aren’t 100 jobs out there—this was pretty much all of them. 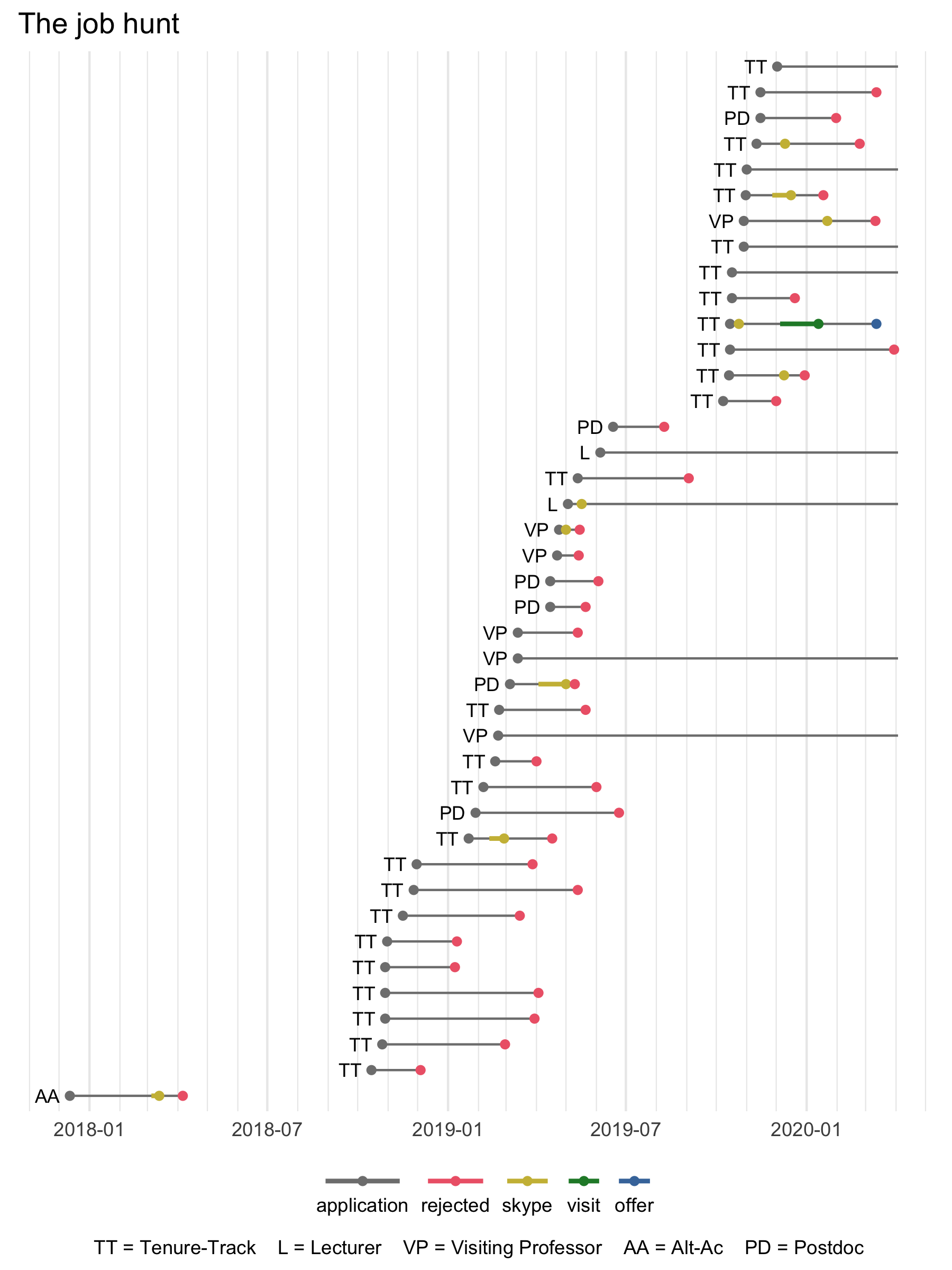 Of the 41 jobs I applied for, 26 were tenure-track, six were visiting professor positions, six were post-docs, two were lecturer positions, and one was Alt-Ac. I got 10 Skype interviews, one campus visit, and one offer. It has never crossed my mind to apply for an industry job (heck, I don’t even know how to!), so there aren’t any there. If things hadn’t worked out this year, I would have started down that route. I think finally did get the hang of applying for jobs towards the end, but I’m just so glad I don’t need to apply for jobs anymore. (Grants though, that’s a different story…)

Again, I’m aware that I basically won the lottery this year. So many grad students won’t be able to get academic jobs—especially with COVID-19 destroying the economy right now. I can’t imagine how bummed I would have been if nothing had panned out. And it’s depressing to think that many of my grad student colleagues will have to open that crushing final rejection letter. I express my deepest sympathy for them.

Today I submitted the revisions for my dissertation to my advisor, and I anticipate submitting the final version to UGA next week. I’ve still got some loose ends to tie up with my assistantship with the Linguistic Atlas Project that I’ll work on this month. After that, it’ll be course prep, house-hunting, and (gulp!) a 28 hour drive to Provo, UT. At least the weather will be nicer there!

barktools: Functions to help when working with Barks