For the fourth time in six years, I presented some of my research at the UGA Linguistics Colloquium. I talked about some findings from my dissertation, though I focused on just the low vowels , , and .

These are relatively old changes

The gist of the talk is that has been gradually lowering over the course of four generations in Cowlitz County Washington, with men consistently lagging behind the women and with the first half of the trajectory doing most of the lowering. Meanwhile, and have been in a near-merged state since at least the 1930s, with no apparent conditioning by sex or generation. Considering that Cowlitz County was settled by English speakers since only the 1850s, these are relatively old changes for this area.

The interesting part is that while the position of is consistently lower for the women, the shape of the trajectory is the same within a generation. That is, when it comes to the vowel’s dynamics, the men are keeping up with the women. It’s just that the global position of that vowel is less advanced.

For me, this opens up a lot of questions about vowel trajectories. I’m curious about what kinds of social conditioning can be found in the trajectory of a vowel, rather than its relative position in the F1-F2 space. In fact, I’ve got some experimental work in motion to answer just that…

One thing I included in this presentation is an animation to help learn how to interpret difference smooths.I’ve been meaning to include this animation in a presentation for a bit now, and with the 40 minute afforded me in this presentation, I finally had the time to do so. Difference smooths are a type of plot that aid in the interpretation of GAMs and you can learn more about them in Mártin Sóskuthy’s tutorial on GAMs. Unfortunately for those of us that fit GAMs to vowel formant data, they look awfully like vowel formant curves, so they can be tricky to interpret. I’ll probably expand this into a full blog post later on, but for now, here’s a brief explanation of (my interpretation of) difference smooths.

Let’s say we have some data, a blue curve and a red curve, sampled at 11 time points. Here, these 11 data points are plotted, with lines connecting the dots. 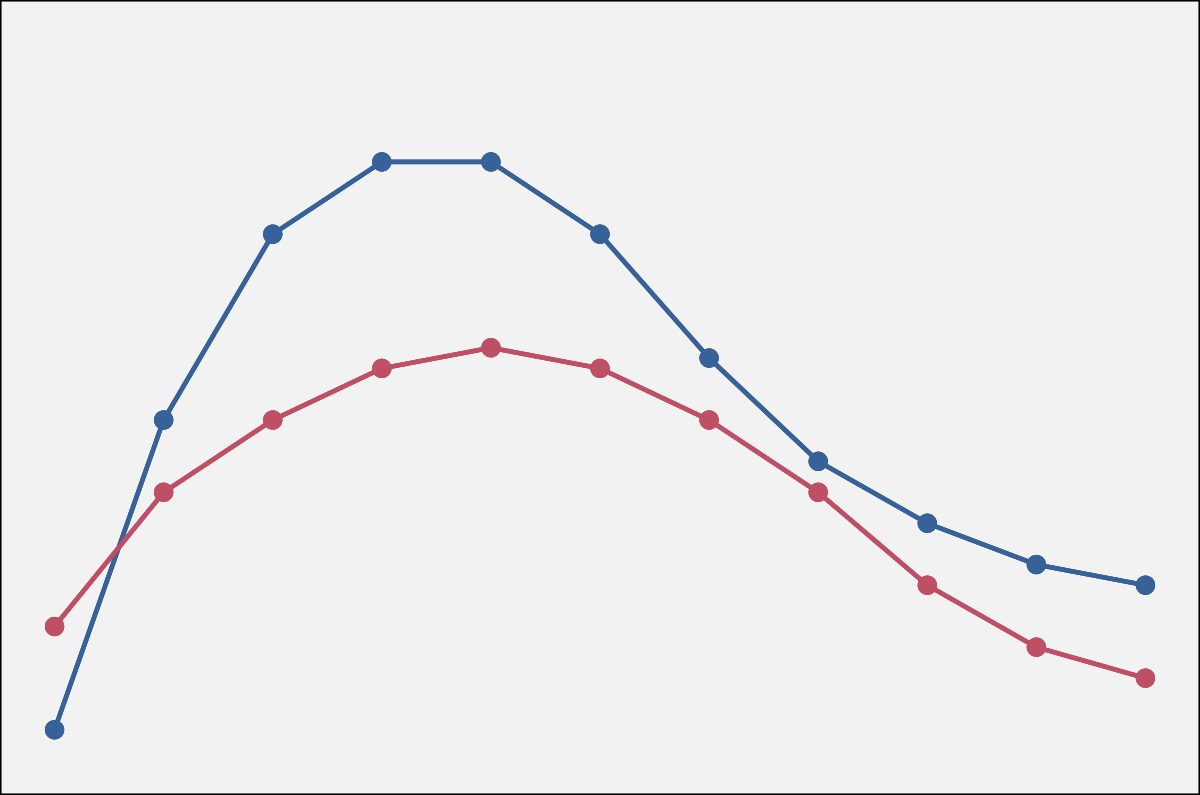 When you fit a generalized additive model to this data, you can get two fit lines (left, below), which is basically a smoothed version of the jagged line above. It’s as if you had sampled continuously rather than at 11 discrete timepoints. When you plot a difference smooth, you get the plot on the right (below), which is essentially one curve “minus” the other curve. 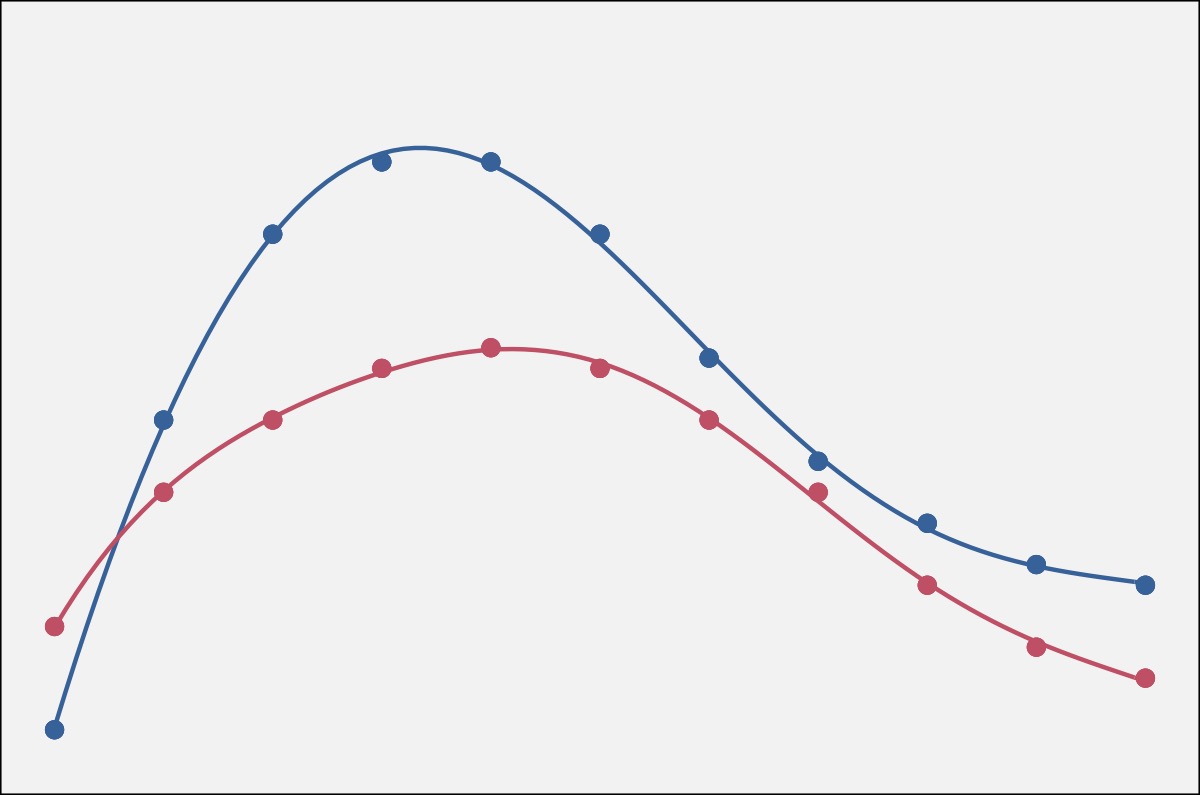 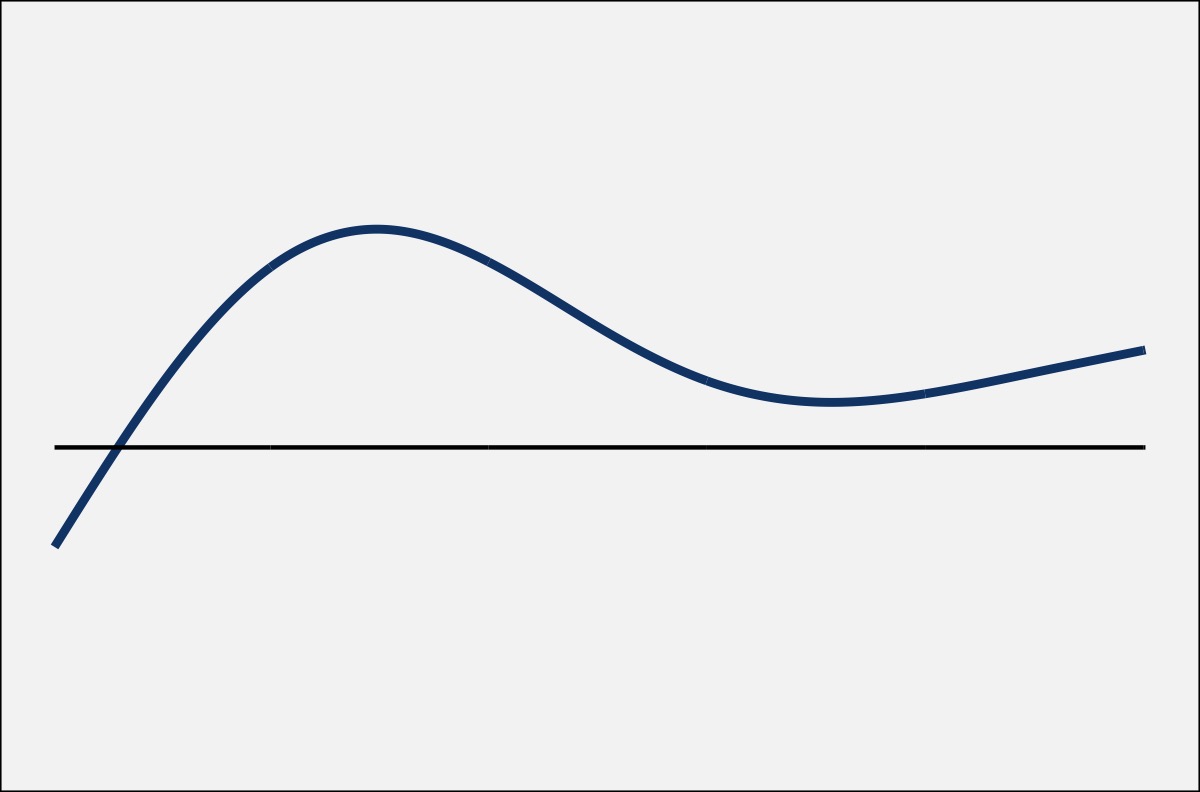 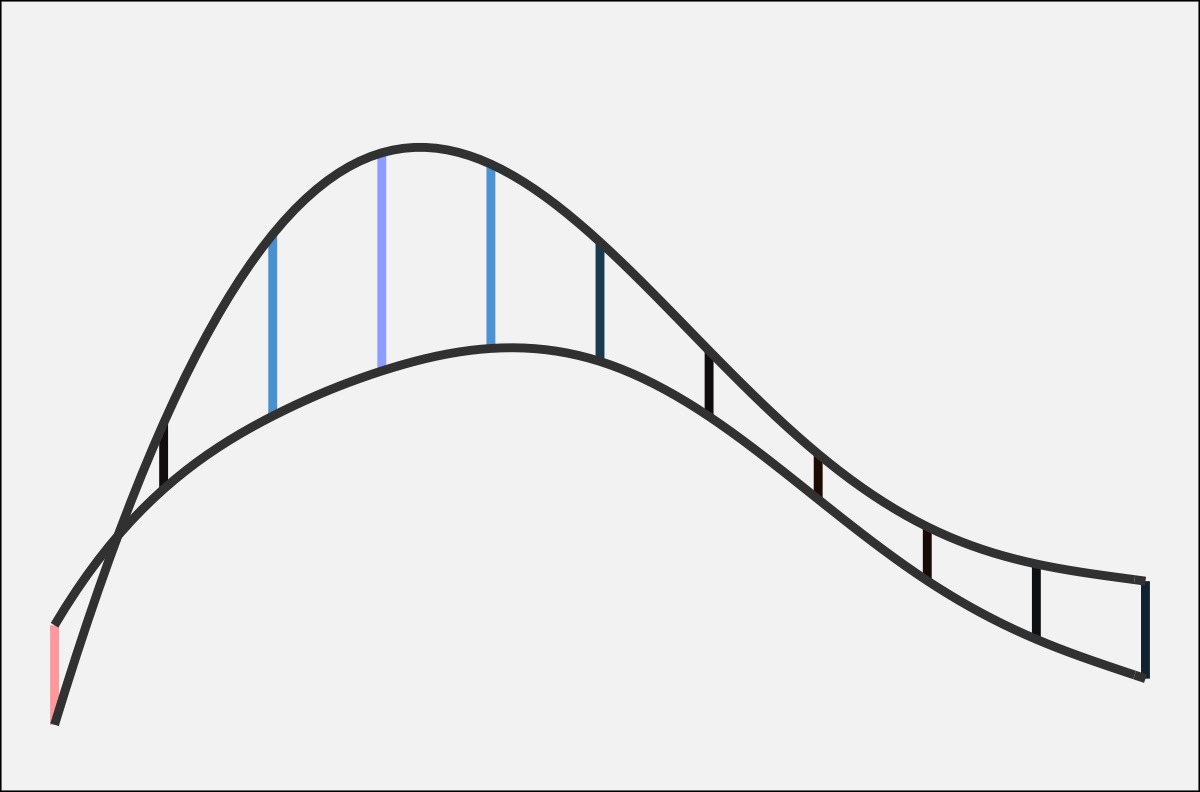 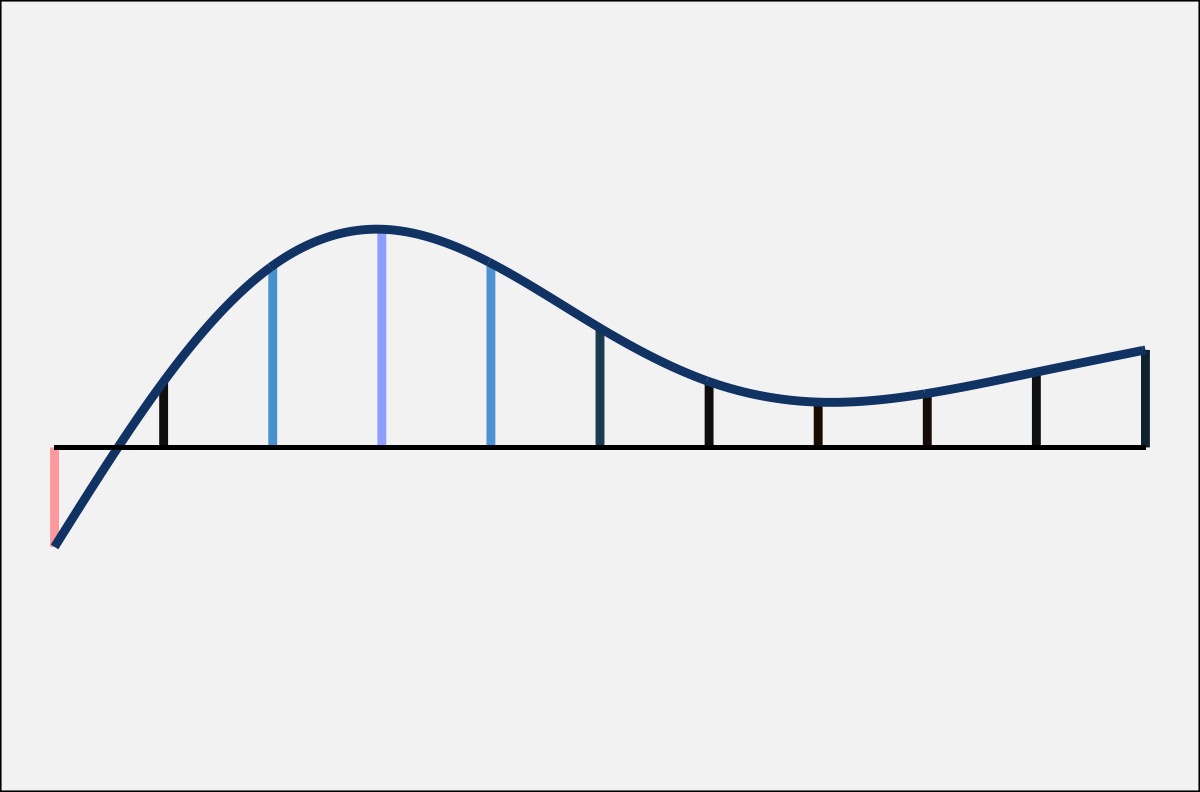 If you’re like me, it still might not be clear how they connect. The following animation may help. It starts with the two curves with the vertical lines between them. Since I’m getting the difference between the two, I’m “subtracting” the bottom from the top. This has the effect of flattening out the bottom one to a perfectly straight, horizontal line. In order to keep the vertical lines the same height, the amount of “bend” that has to happen to the bottom line has to apply equally to the top line. The result is a new curve called the difference smooth.

Once you’ve grasped that, you can then add some additional information to the plot. Typically, difference smooths come with confidence intervals,Exactly how these confidence intervals are calculated is something I’m still learning. which I highlight in gray below. Wherever the confidence interval does not overlap with the horizontal (zero) line, the curves are interpreted as being statistically significantly different from each other. 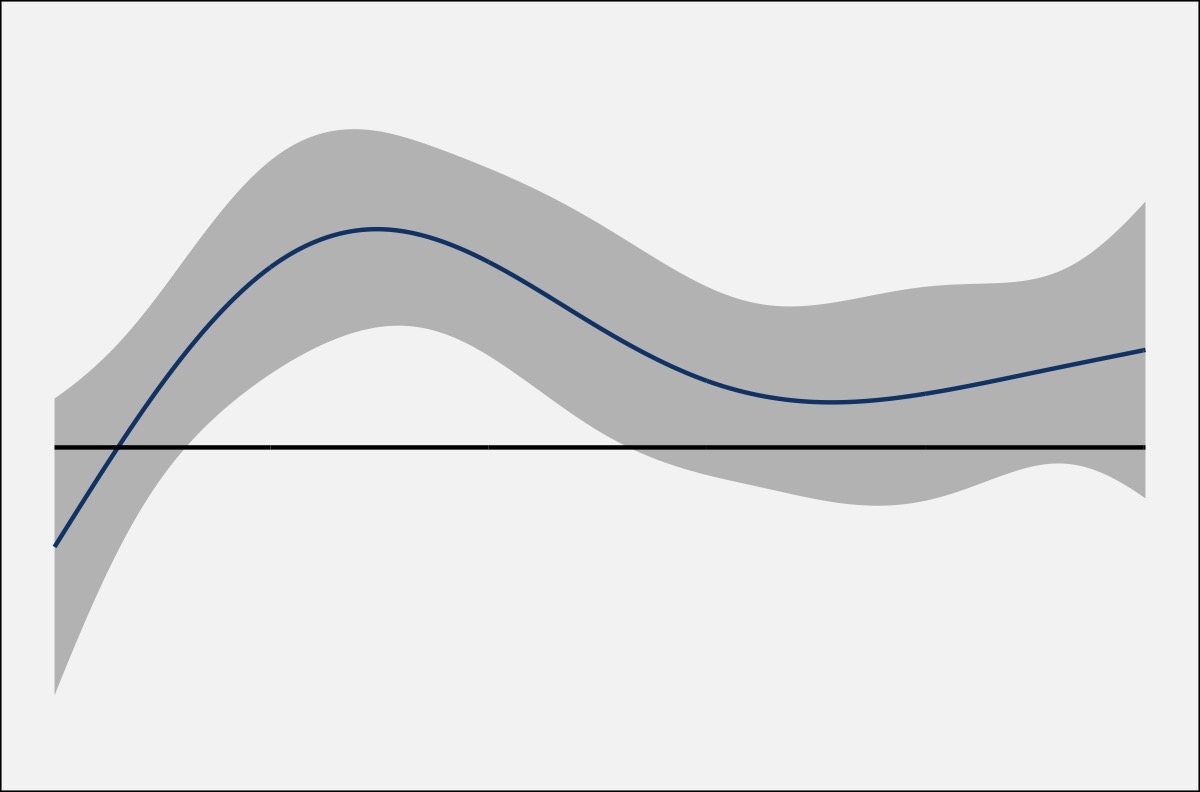 In this case, since the original red line is subtracted from the original blue one, with the confidence intervals on this difference smooth, I can say that the blue line is significantly higher than the red for some region.

There are R packages that can create difference smooths (I think itsadug might be most well-known). I’m not a huge fan of the aesthetics of that plot, so I’ve created my own version using the same data, and in ggplot2. I’d like to release it in a package sometime soon so you can use them too if you’d like. Finally, the plot below is the version of the difference smooths I use in this presentation, my dissertation, and anywhere else I’ve needed them so far. 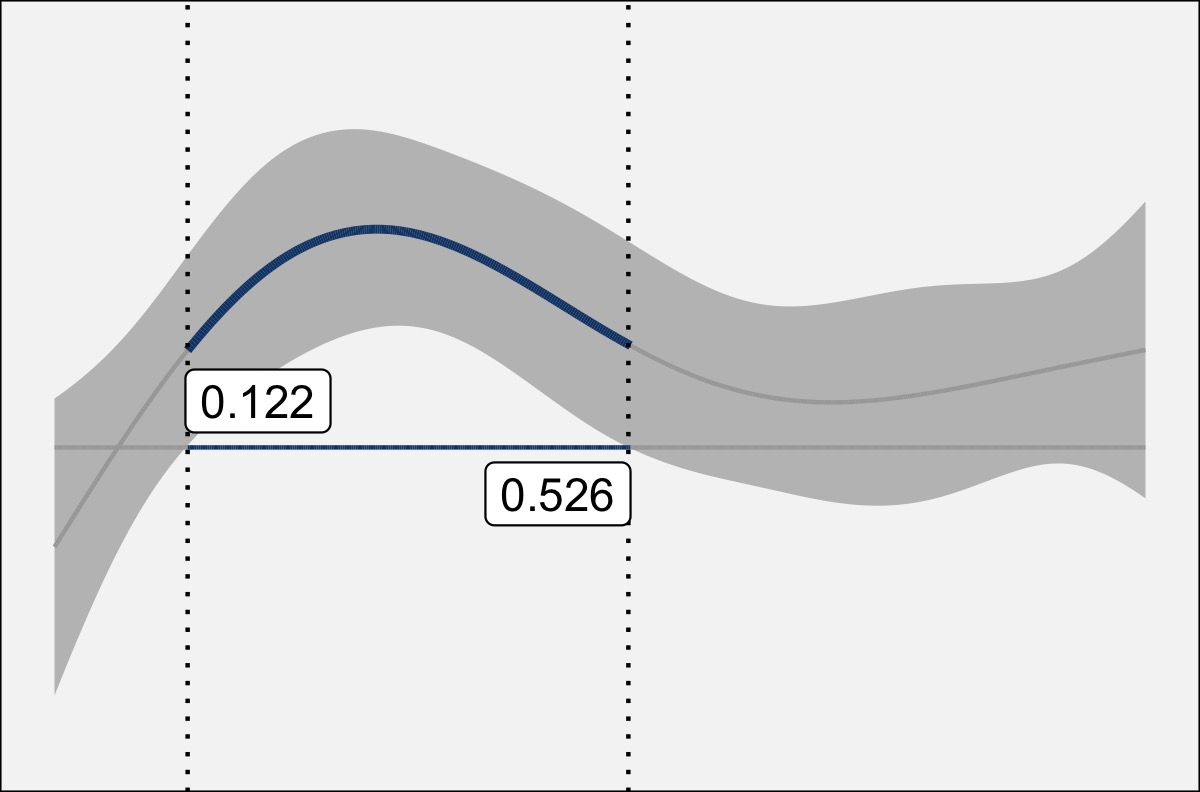 I just kinda like the look of this style of plot, so that’s the one I’ve been using.

I’ve at least benefited from interpreting difference smooths in this way. Hopefully the attendees of my talk today (and now you!) will have slightly better understanding of them as well.