I’m happy to announce the release of another R package, generations! I’ve apparently caught the creating-R-packages bug because this is my fourth one this year (futurevisions, barktools, joeysvowels, and now generations). This one provides some functions to easily convert years to generational cohorts (Boomer, Gen X, Millennial, Gen Z, etc.).

I recently read Howe & Strauss’ book, Generations: The History of America’s Future, 1584 to 2069. While the generational theory they propose isn’t water-tight, it is intriguing. Relatedly, I’ve seen lots of linguistics studies that model age in generational cohorts. (Ideally, we’d model age as a continuous variable, of course, but sometimes there’s just not enough data to do so.) I used a categorical age variable in the models in my dissertation and in other recent studies and, while it’s not perfect, it seems to work well enough.

Well, so now that I’m converting age into generational cohorts in lots of different projects, my code is starting to get a little repetitive. And in the R world, they say if you end up writing the same code a lot, might as well wrap it up into a package. This idea came to me about a week ago and this weekend I found some time to put this together.

The result is generations. And, I’ve made it so that it doesn’t depend on any other packages, so it was fun for me to figure out how to do some things in base R that I only knew how to do in tidyverse, which was fun for me! The rest of this post is the readme page for the package. You can find more about the package at joeystanley.github.io/generations.

This package contains functions that will convert years of birth into names of generational cohorts. For example, 1989 becomes "Millennial". The package contains several helper functions to modify the underlying lookup table as well as way to query it.

The package currently lives on GitHub, so you can install it like you would with any other package on GitHub:

You can then load it like you can with any library.

For the purposes of this tutorial, I’ll load ggplot and dplyr as well.

The main function in this package is generations(). Given a vector of integers, it’ll return a factor of generation names. First, I’ll generate some random years of birth.

I can now easy convert that into generations.

This function works on any year between 1435 and 2030. Numbers outside that range return NA.

Note that by default, the function will return the vector as factor, with the levels ordered so that the oldest generation in the vector is first. To get a character vector instead, add the argument as_factor = FALSE.

There are some tweaks you can do to adjust the output of generations. First, you can return longer forms of the generational names by specifying full_names = TRUE.

What this does is simply add "Generation" to the end of each one, unless it’s "Gen X" (or Y, or Z), in which case it’ll expand it out to simply "Generation X".

You can also show the years included in each generation by adding the years = TRUE argument. This will add a space and, inside a pair of parentheses, the start and end years of that generation, separated by an en dash.

The primary purpose of this is for visualizations, since not everyone is familiar with (or agrees with) the year ranges. For example, if you’ve got a bunch of people and want to visualize the distribution of when they were born, you could have very informative legends. 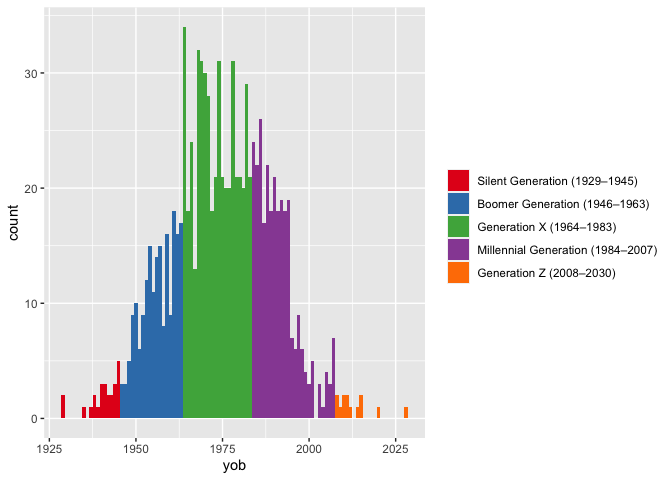 How this additional portion is formatted can be adjusted. If rendering an en dash is troublesome for you, you can change it to something else with years_range_sep. You may also want to change the space between the generation name and the opening parenthesis into a newline character with years_sep, again for visualization purposes. 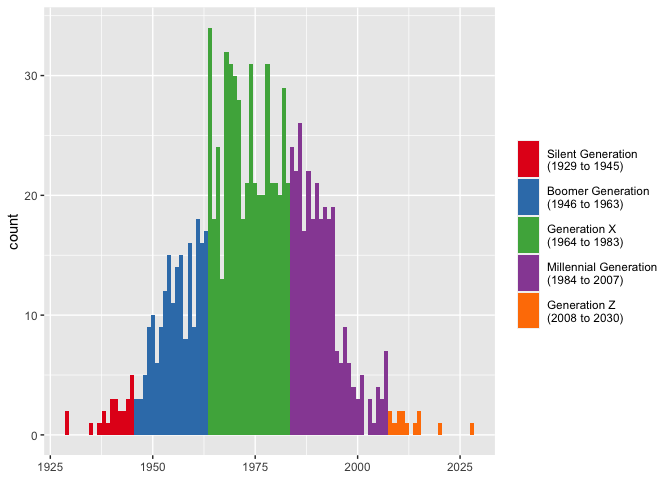 If you want to get really fancy, you can make the legend keys approximate the width they take up on the x-axis and put better tics marks. 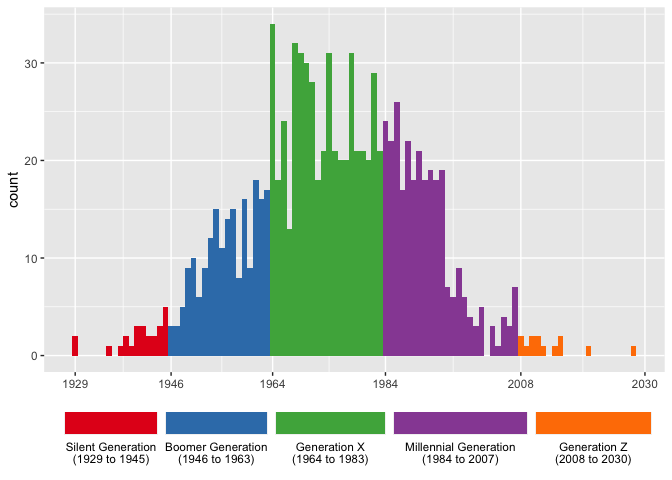 To see a list of the generational data, you can use show_generations(), which will return a data frame containing the names, start years, and end years.

You can also get simple information. For example, if you want to know when the start or end year of a particular generation is, you can use get_start() or get_end():

You can also find the names of neighboring generations with get_prev_gen() and get_next_gen(), though these were mostly created for internal purposes only rather than for you to use.

Note that if ask for something newer than Gen Z or older than Aurthurian it will return NA.

The data that this package uses is loaded as a hidden object when you load the package. You may modify it with the functions described in this section. These changes will affect the dataset so long as the generations package is loaded. You’ll have to reset the data each time to reload it.

The labels and years for each generation are mostly borrowed from Howe & Strauss’ Generational Theory books. However, not everyone agrees on the names and year ranges for the various generations. For this reason, the generations package makes it easy to modify the generations data to your liking.

To rename a generation, use rename_generation(), with the old name first and the new name second. For example, if you want to use Zoomer instead of Gen Z, you can do so.

Because many people may want to use the term Zoomer instead of Gen Z, a shortcut function, use_zoomer(), which is just a wrapper around rename_generation("Gen Z", "Zoomer"), is included in the package. The other shortcut functions are use_gen_y(), use_13th(), use_baby_boom() as well as their reciprocals use_gen_z(), use_millennial(), use_gen_x() and use_boomer().

You may also want to change the years. For example, many people consider 1997 as the end of the Millennial Generation. You can make this change with redefine_generation(). With this function, you must specify the new start and the new end year.

Since changing one generation impacts adjacent generations, you’ll get a message showing you what the new ranges are for this, the previous, and the next generations.

You can reset the data back to its original form with reset_generations().

That’s the package so far! I plan on adding more things in the future, primarily to handle stability issues and to include some error catching. Hopefully, if you use generational cohorts in your data, this package is useful for you.