At the 46th New Way of Analyzing Variation conference in Madison, Wisconsin, I presented a poster called Changes in the Timber Industry as a Catalyst for Linguistic Change. In a nutshell, I found a couple interesting things going on in a small town in Washington:

Linguistic changes—I focused on two variables: bag-raising and goat-diphthongization. Specifically, older people raised bag and younger people had a more diphthongal goat. The generational divide was around 1970 and the difference between older and younger people was sudden.

Census data—Based on topics of conversation in the interviews, I took a look at census data and found some correlation with these linguistic changes. The mills laid a bunch of people off, people were earning less money, a bunch of people left town, and more of those who stayed worked outside the community. Correlation does not equal causation, but it’s paints a pretty compelling picture.

Catastrophic events—One of the interesting findings was using regression with breakpoint as a way to model catastrophic change. I’m refining this methodology right now, but it does seem to work for modeling language change in time. 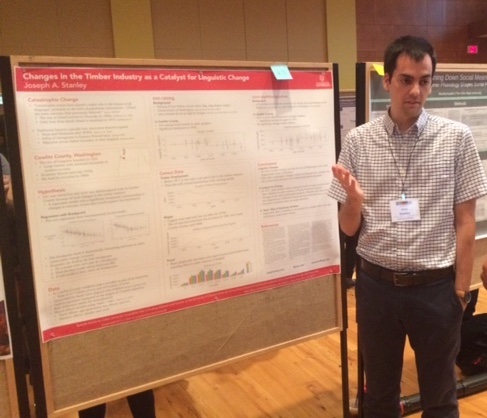 (Not the most flattering photo, but there I am.)

A Tutorial on Extracting Formants in Praat