In April and May this year, I posted a survey to a bunch of different subreddits that asked people how they pronounced certain words. If you took the survey, THANK YOU! The number of responses I got was overwhelming and took much longer to analyze than I could have ever anticipated. So, after many months, I’m finally ready to post the results for you. Hopefully you’ll find them interesting.

TL;DR I asked a bunch of people how they pronounced words that rhyme with bag or beg. Basically, people from the northern US and Canadians tend to pronounce them with the same vowel as the word bake. Also, if you do though, it’s less likely in longer words.

In case you haven’t noticed, not everyone speaks English the same way. And that’s okay! Linguists like me study these differences between people and we can learn a lot about language and society when we do so.

The specific thing I was interested in was how people pronounce specific vowel sounds when they come before a g—linguists call this thing “prevelar raising.” A bunch of words in English, something like 84 of them, have this “agg” sound in them. Words like bag, sag, flag, rag, dragon, and aggravate. For shorthand, I’ll refer to this group of words as the “ words.” Most English speakers from North America pronounce that vowel the same as a word like back (the “short a” sound). Well, as it turns out, there are some people that pronounce these words with the same sound as bake (the “long a” sound). I’ll call this phenomenon -raising. Linguists have found that this -raising generally occurs in Canada and a lot of US states that border Canada.

So then there’s another set of about 60 words that have this “eg” sound in them, like beg, egg, leg, keg, legacy, and integrity. I’ll call this group of words the “ words.” Most English speakers pronounce this with the same sound as deck (“short e” sound). But, some people (like me) pronounce some or all of these words with the same vowel as bake (the “long a” sound). But unlike , we don’t really have a great idea of where in the country people do this.

So what better way to find out than to ask several thousand people, right?

How did I do this?

If you want to take the survey yourself, click here! So several months ago, I picked several dozen and words and created a survey that asked people how they pronounced each one. Basically, people saw a word and were asked whether it sounded more like bake, deck, or back.

I then went to the subreddit dedicated to each US state and Canadian province and territory and asked the moderators if I could post a survey. Almost all of them said yes. So with a dedicated Reddit account (/u/dialectologist), I went ahead and posted it on about those 60 subreddits.

And tons of people took the survey! Almost 7,000! And from these responses I got around 567,000 individual survey questions answered. This was like ten times more than what I expected. Super cool.

When I was processing these responses though, I wanted to find a way to turn them into numbers. So what I did was every time people answered bake, that was a 1. Every time they answered deck, that was a 0. And every time they answered back I gave them a –1. I then took all the responses for a person’s words and averaged them to get their “degree of -raising.” Same thing for their words to calculate their “degree of -raising.” I also turned it the other way and calculated each word’s score by averaging all the responses across all people.

Finally, to get people’s location, I took the responses they wrote down on the question that asked “where are you from” and found the GPS coordinates of that city.

Now, on to the results!

I’ll start with the words. As I said before, -raising generally occurs in Canada and in the northern US. Here’s a map of what I found in my survey:

In this map, darker, bigger circles represent people who had more -raising while smaller, white circles are for those that had less. So my survey results were pretty much what I expected based on existing linguistic research.

However, sometimes people had -raising on some words but not on others. Were there any sort of patterns? Here’s a colorful plot that puts the in order of how much they were raised, with Volkswagon sounding like bake or deck the most often and Mary Magdalene the least. 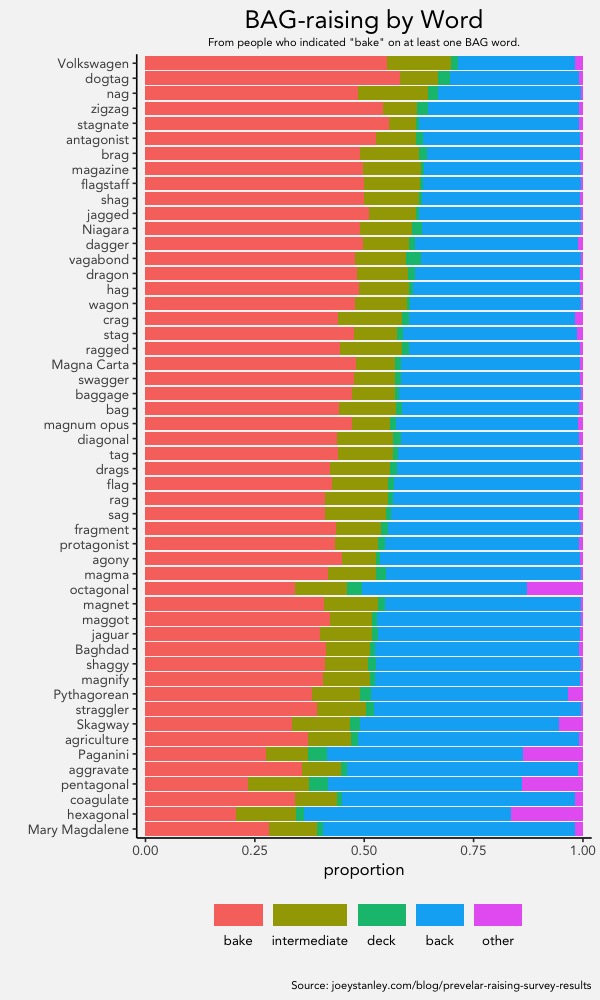 In this chart, each word is on its own row. Within that row, the width of the red box is the number of people that indicated that they say that word with the same vowel as bake. Yellow is “somewhere between bake and deck”. The small green ones are deck and the blue ones are back. Purple are where people said it had some other vowel. This chart shows that not all words are equally likely to be pronounced the same, but the difference between the Volkswagon at the top and Mary Magdalene at the bottom is admittedly not that huge.

So now lets turn our attention to the words.

So words are cool and all, but a lot less research has been done on words. This was the main thing I wanted to find out: where do people have -raising and what words are more (or less) likely to be raised?

To answer the first question, here are the results on a map: 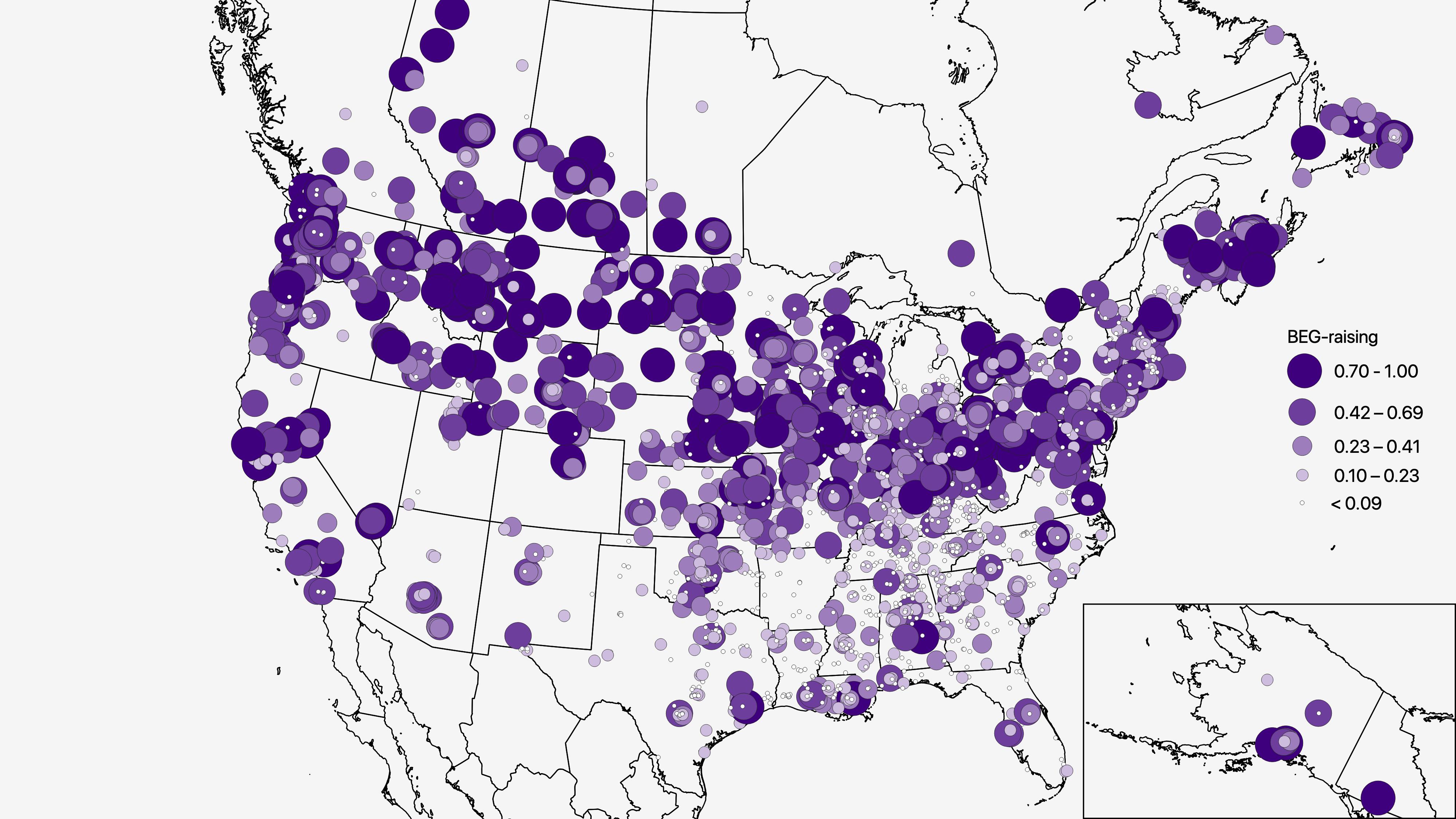 Again, darker, bigger circles represent people who said more -words had the same vowel as bake while smaller, white circles are for those that said it was more like deck. So this shows that you’ll hear people pronouncing words like bake at least some of the time pretty much everywhere but the South. Linguists already kinda knew this happened in the Pacific Northwest, but the fact that it’s in pretty much all Western and Midwestern states (especially in that stretch from Illinois to Pennsylvannia) was news to me.

Just as surprising was the following plot which shows how often words were raised: 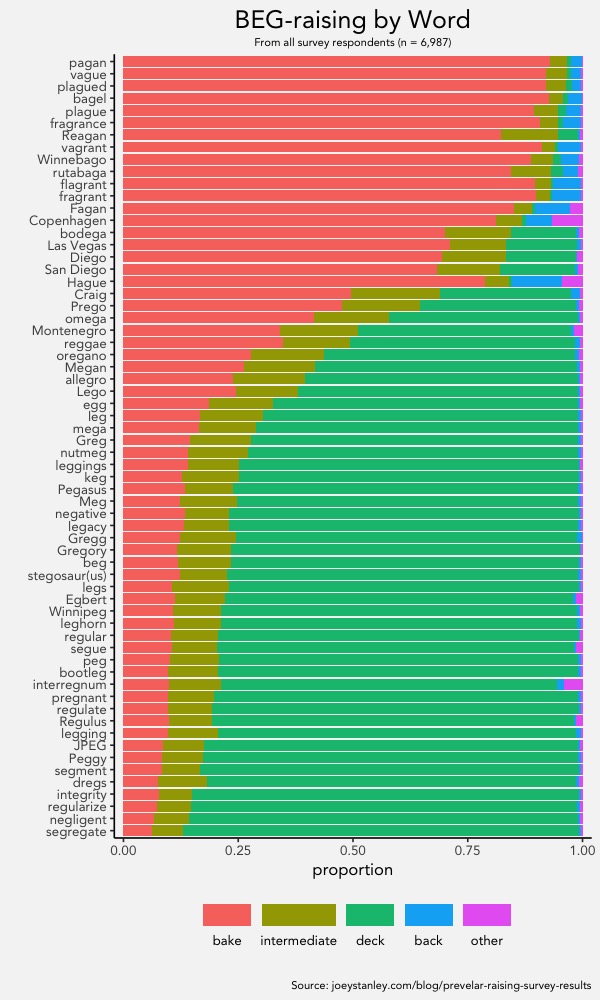 Here, we see that there’s a major difference between the top and bottom of the chart. Okay so technically, words like vague, pagen, plague, and fragrant don’t belong on this chart because pretty much everyone would pronounce them with a “long a” sound. I’ll ignore this for now. But even between words that are spelled with eg, there’s a big difference between them. A word like segregate is said with the same vowel as bake less than 10% of the time. But a word like egg is almost 20% and omega is almost 40%. And, if you look closely, most of the words towards the bottom all have consonants following the g—integrity, segment, pregnant. That’s pretty interesting if you ask me.

Both in one map

When you combine the two maps, you can start to see where one vowel is pronounced like bake and the other is not. Here, green areas are those that have -raising but not -raising and purple are areas with -raising without -raising. 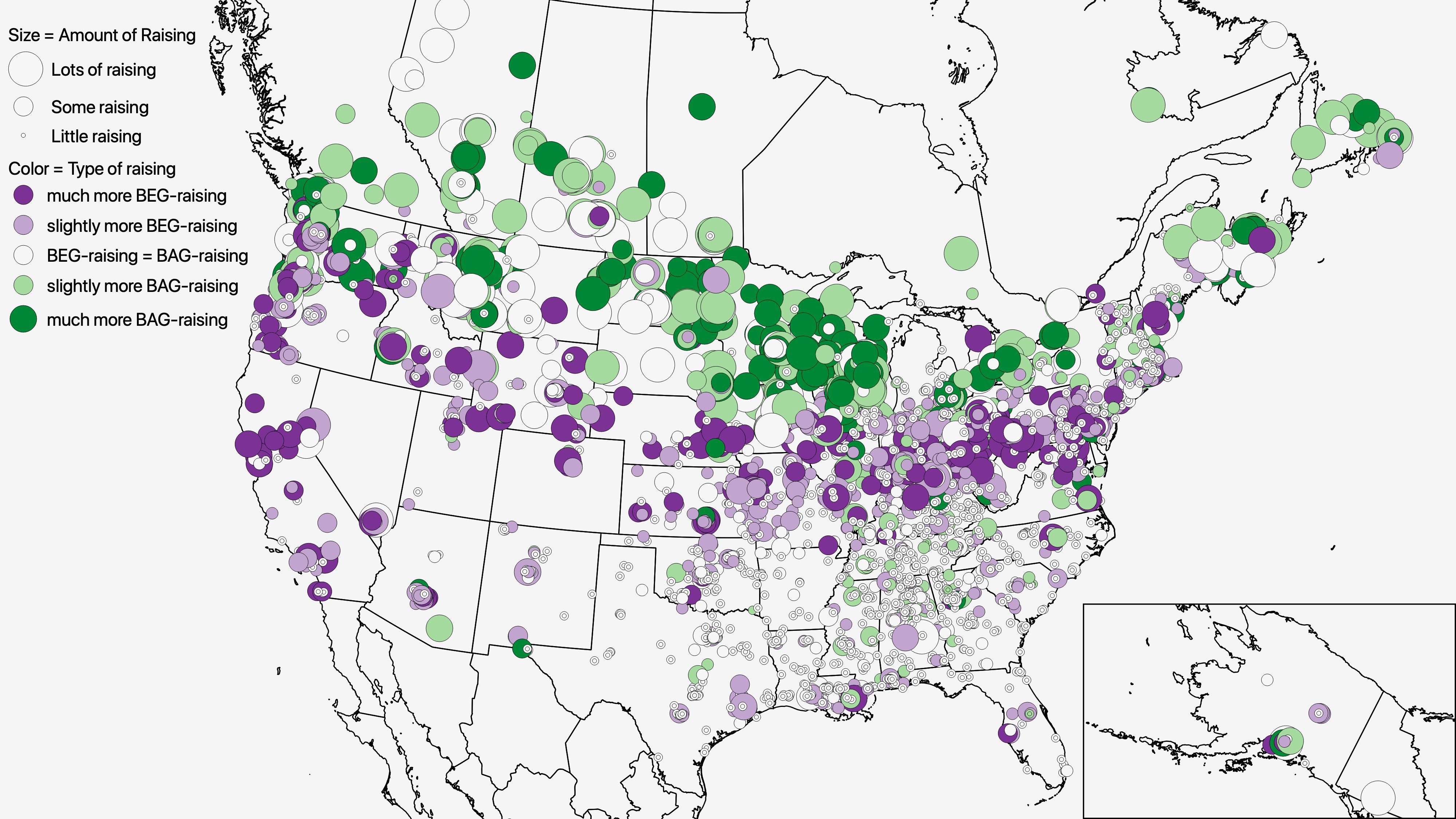 Basically, the whole reason I did this survey was to produce this map. I wanted to see if there would be purple areas without green and green areas without purple. And there are!

Again, if you took the survey, a huge thank you. I’ve had a lot of fun playing with this data, and it has been interesting to read the your comments on Reddit and in the survey.

If you’re a linguist and want to learn more, feel free to look at the poster I did at NWAV this year and if you’ll be at LSA you can see me present Friday morning in the ADS sessions.